Now that I’m in better shape it’s easier to address conflicts with my wife and kids because my energy and mental clarity are incredible. Life is so much more enjoyable now. I can be present with the family now that I feel healthy and in control

Joel hired me in the spring of 2019 after he saw a picture of himself on his 39th birthday and realized that he’d gained quite a bit of weight. He was determined to get to his 40th birthday leaner and in great shape. After hopping on the scale and seeing his weight in the 240s – he finally decided enough was enough and he hired me to map out a plan for his True Transformation.

As we kicked off his plan, Joel’s biggest hurdle was his work schedule and eating out at restaurants for client meetings. It’s not always easy to pick a good option of the menu at random restaurants. Not to mention Joel travels from time to time for work so being careful to order appropriate meals for room service and eating at company events was also a concern. Having an eating routine that would allow him to drop fat but not feel too restricted was something we needed to address right away.

Joel is married with 2 kids and wanted to make sure that his family time was protected. He wanted to lose weight, but he didn’t want his plan to consume his entire life. Instead he needed a plan that would be the missing puzzle piece in his overall lifestyle.

1) Get a healthy meal in if you’re going to be drinking.  Something like salmon, veggies and rice or a leaner steak (filet, NY strip) with broccoli and some potatoes.  Keep it healthy and avoid a ton of appetizers and bread.

2) For every drink – be sure to have a glass or bottle of water.  Then at the end of the night chug 2 normal sized bottles of water (3 is even better) and if you can find it drink a Powerade Zero (no calories but tons of electrolytes).

3) To start, you’ll want to avoid high-calorie and high-sugar drinks, such as margaritas, Long Island Iced Tea, Daiquiris, Heavy Beers, White Russians, and Piña Coladas. If you are having mixed drinks or need a chaser, you’ll want to turn to water, club soda, diet tonic water (yes, regular tonic water has calories), diet soda, or Crystal Light packets. While a piña colada may be delicious, at a whopping 205g of carbs each, I’d rather have a few tequila sodas, rum & diet cokes, or IPA’s.

4) Vodka/soda or Tequila/sodas with lime are my go-to.  Super low calories.  If you do a mixed drink be sure to use diet soda or just soda water with lime.  Beer wise I prefer Coors Light or Stella (but keep beer to no more than 2).
Overall my suggestion is to keep drinking to 1 night per week max as we work together.  However if you do more than 1 night – that’s fine, but more than 2 will set you back.

Need a meal plan that will help you burn fat faster? Check this video out:

Joel committed to getting into the gym first thing in the morning Tuesdays – Friday. On Saturday he would do a shorter high intensity workout. Sundays and Mondays he would take a break from training. This was a solid set up and it allowed for Joel to stay on track with workouts while at home and on the road.

Every 3 weeks we shifted gears a bit and mixed in new exercises, rep ranges and rest time between sets.

For cardio we knew Joel wouldn’t have time to do a ton of scheduled cardio workouts. That’s why I set a daily step goal for him to hit. We started off aiming for 8-10k steps per day. Once that became second nature we bumped that up 10-12k steps per day. This ensured that Joel stayed active and burned enough calories to support his goals each day without having to be stuck on the treadmill to do cardio.

Joel attributes his success to a few things:

Sign up for more info and awesome articles from Josiah, delivered directly to your inbox each week. 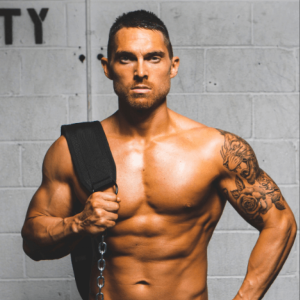 Josiah Novak is an American fitness coach, author, and speaker. His articles have been featured in Fitness RX publications and he’s been a guest on MindPump and the Order of Man podcast.
PrevPreviousBuild a Body Like Chris Hemsworth
NextHow to make a Lower Calorie Smash Burger that still tastes good.Next

Fitness, mindset, and motivational content from Josiah Novak to help you transform your body and live a happier, more productive life.